“Sir,” the woman said to Him, “give me this water so I won’t get thirsty and come here to draw water.” “Go call your husband,” He told her, “and come back here.” “I don’t have a husband,” she answered. “You have correctly said, ‘I don’t have a husband,’ ” Jesus said. “For you’ve had five husbands, and the man you now have is not your husband. What you have said is true.” “Sir,” the woman replied, “I see that You are a prophet. Our fathers worshiped on this mountain, yet you Jews say that the place to worship is in Jerusalem.” Jesus told her, “Believe Me, woman, an hour is coming when you will worship the Father neither on this mountain nor in Jerusalem. You Samaritans worship what you do not know. We worship what we do know, because salvation is from the Jews. But an hour is coming, and is now here, when the true worshipers will worship the Father in spirit and truth. Yes, the Father wants such people to worship Him. God is spirit, and those who worship Him must worship in spirit and truth.” The woman said to Him, “I know that Messiah is coming” (who is called Christ ). “When He comes, He will explain everything to us.” “I am He,” Jesus told her, “the One speaking to you.”
John 4:15‭-‬26

Jesus had been talking to the women at the well about the Living Water He could give that was a well-spring that would permenantly quench her internal thirsts and appetites and she had ask Him for this “water”, when He exposes her proverbial thirst. He tells her, “go get your husband”. Some believe it was because men and women in that day weren’t allowed to converse in public–I believe it was because His request forced her to expose her issues. She replied, “I don’t have a husband”, to which He responded, “correct–the fact is that ‘you’ve had five husbands, and the man you now have is not your husband.'” I’m sure she was baffled!

The women responds by acknowledging that Jesus must be a prophet, but then tries to duck her issue. She asks about where the proper location of worship is, Jerusalem, as per the Jews or Mt Gerazim, where the Sameritains believed it to be. In short, Jesus replies that it doesn’t matter, because the day was soon coming when God’s true worshippers would worship from their hearts, “in spirit and in truth”. Jesus knew that day was coming soon when He would die on the cross and when the vail in the temple would be torn, providing access to the God the Father through Jesus rather than through a priest. (See Matt 27:51 & Heb 9 & 10:19-22)

The women, now undoubley sure that she was talking to Someone special, replies, “we know that Messiah is coming” (who is called Christ ). “When He comes, He will explain everything to us.” She is obviously expecting the Coming Messiah! Jesus reponds to her with unmistakable meaning. He says, “I Am He . . .He is the One speaking to you.” The original Bible language and even the older translations are even more powerful, ending Jesus’ response with the words, “I Am”, refering to Moses’ encounter with God at the burning bush (Ex 3), and unmistakenly identifying Jesus, not only as Messiah, but as God Himself! 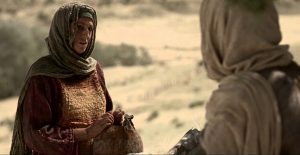 Jesus purposefully went through Samaria, specifically to talk to and rescue this particular woman (we’ll see more of why tomorrow). He sought her out, confronted her sin issues and saved her!
He’s been pursuing some of us for quite some time now–what will our response be to Him?

Our mission is to be the hands and feet of Jesus Christ on Earth. Our motto is "Love God, love others" and our passion is to find, equip, and train the Christ-following leaders of the next generation.